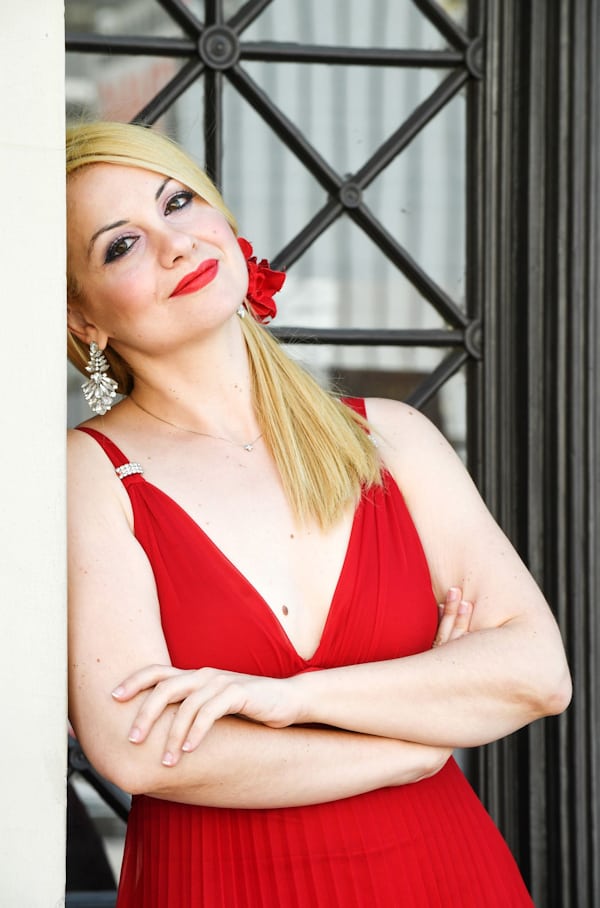 Greek-Cypriot lirico-spinto soprano, Chryso Makariou, is one of the most distinguished Cypriot singers of her generation. Following her graduation from the National Music Academy of Sofia “Pancho Vladigerov” in Bulgaria she moved to Vienna where she continued her studies with the renowned mezzo-soprano and distinguished Kämmersängerin, of the Vienna State Opera, Prof. Margarita Lilova.

Chryso Makariou collaborated often with the Slovak National Radio Symphony Orchestra and the Banska Bistrica State Opera in Slovakia, where she appeared as the soprano soloist in Mozart’s Requiem in D minor, K. 626 and in the roles of Contessa (Le Nozze di Figaro/W.A.Mozart) and Micaela (Carmen/G.Bizet). She appeared also as Micaela, for The Small Theatre Sofia and toured Austria and Germany for Kinderoper Papageno, in the role of Aida (G.Verdi). Makariou has also performed in the role of Romilda in Handel’s Xerxes for “Vienna Piccola Opera” and was also a regular soloist for “Opernloft Hamburg”.

An important role for the warm lirico voice of Mrs Makariou is Contessa where, among other, she sang under the baton of Prof. Maximilian Cencic in Vienna (2014) and also later that year, at the Museum Mozarthaus Vienna where she  sang major arias and ensembles from other Mozartian operas; including Don Giovanni (Donna Elvira) and Così fan tutte (Fiordiligi). She had the opportunity to reprise her success in the aforementioned Mozartian roles under the baton of Wolfgang Scheidt in the Czech Republic at the Opery v Jablonci nad Nisou, Krušnohorské Theater in Teplice and Smetana Hall in Prague (2016).

The talented lirico-spinto soprano is also a keen community supporter and has appeared at the famous “Ambassadors in Concert” music benefit at the Wiener Musikverein alongside opera stars such as Zoryana Kushpler, Clemens Unterreiner and KS Olivera Miljakovic. She captured audiences at the beginning of the 2014/2015 season with her performance at the Royal Hofburg Palace in Vienna for the International Atomic Energy Agency (IAEA) Viennese Ball and, again, at the largest Viennese Ball (IAEA 2015) where she sang in front of an audience of five thousand people.

Chryso Makariou feels at home and comfortable with operetta and concert repertoire as she is on the international opera stage. She appears regularly as a soloist with the Cyprus National Symphony Orchestra, with the Hong Kong Youth Symphony Orchestra, the Wiener Barockorchester, the Wiener Salon Symphony orchester and many other. Mrs Makariou performs also on tour, with ensembles and orchestras, in countries like South Korea (2016), Finland (2017), Slovakia (2017), Greece (2018) and Serbia (2019).

Other notable musical projects include Chryso’s beautiful performance at the Gasteig Philharmonie in Munich, “Aphrodite in den Opern von Mozart” for the Zyprischer Frühling 2016 Concert Series, celebrating Cypriot artists and culture and her acclaimed musical-theatrical performance, “Maria Kalogeropoulou Callas, the woman and the artist” in her homeland of Cyprus (2019), a collaboration between the Greek National Television, the Greek National Opera and the Cyprus Association “One Wish One Dream”. Chryso Makariou also performed at the Belgrade International Summer Festival during the Summer of 2019 and made also her debut at the Stara Zagora Opera (Bulgaria), during the same period.

Chryso Makariou is mentored in Vienna by Eugenia and Ilko Natchev and the internationally acclaimed Bulgarian mezzo soprano Vesselina Kassarova.